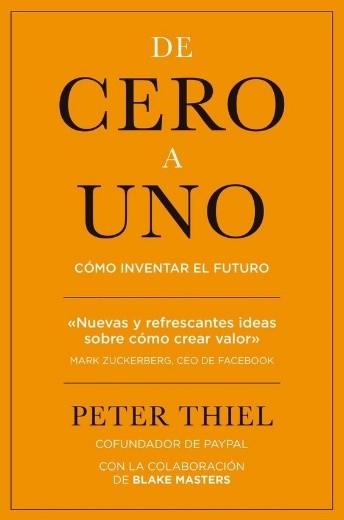 In the business world, every moment is unique. The next Bill Gates will not create an operating system. The next Larry Page or Sergey Brin will not make a search engine. And the next Mark Zuckerberg will not create a social network. If what you do is copy them, it is obvious that you have not learned anything from them.

This book addresses how to build companies that create new things and builds on what I have learned as a co-founder of PayPal and Palantir, and as an investor in hundreds of startups. In these years, the most powerful pattern that I have found is that successful people find value in unexpected places, and they do so by thinking about the company from basic principles, not formulas.

When I interview a job candidate, I ask the following: “Tell me a truth important to you that very few people agree with.” Although it may seem easy to answer, it is actually difficult, because what we learn is by definition agreed knowledge. And also because to answer you have to say something unpopular. A good answer would be: “Most people believe in x, but the opposite is true.” What does this paradox have to do with the future? That the good answers are those that come as close as possible to glimpse it.

Progress takes two forms: horizontal, based on copying things that work (going from 1 to n), and vertical, which means doing new things (going from 0 to 1). This is the most difficult, because it involves doing something that no one has done before. If you take a typewriter and build a hundred, you have made horizontal progress. If you take a typewriter and build a word processor, you’ve made vertical progress. Vertical progress (that of Silicon Valley companies, for example) is possible thanks to technology, while horizontal progress (let’s think of Chinese companies) is supported by globalization.

Although most think that the future will be defined by globalization, the truth is that technology is more important. And this technology usually comes from startups, since it is difficult to develop new things in a large organization. On the other hand, in startups, for things to go ahead, you need to work with others, but you also have to keep a size small enough to be able to carry them out. To succeed in business, you have to do the same as a startup, which is to question the ideas received and rethink the business from scratch.

I have been the General Manager of Yanbal Mexico and the leader of the commercial area of important local and global companies, such as Microsoft, Interbank, and Procter & Gamble. I am committed to innovation and transformational leadership. I am passionate about riding and spending time with my family (Diego, Mauricio, and Arantxa). My dream is to be able to influence more people throughout my life, so they can develop both personally and professionally.